It has been quite a while since I last posted an update about our work on the Carbage run car. We did make quite some progress!

We finished the orange vinyl wrap. Although it all looks peachy on the pictures, the wrap job didn’t go quite as planned. Partly because we never wrapped a car before, but also because the vinyl wrap I bought was really bad. When I ordered it, I didn’t feel like spending €600 on some decent vinyl (3M, Avery, VViViD) so I went for cheap no-name stuff that “only” cost me just under €200. That turned out to be a mistake. The foil can not stretch enough to wrap it around bumpers, it gets shiny very quickly if you apply heat (it basically melts), the adhesive is very bad (we had to redo some parts because the foil literally came off) and it discolored after sitting outside for just a couple of days. And it wasn’t even sunny. In retrospect, the €400 I saved wasn’t worth the extra work, frustration, and sub-optimal result. If I am ever going to wrap a car again, I will definitely go for one of the brands mentioned above.

Unfortunately, we didn’t have much luck with the stickers either. I wanted to have the name of the team on the car, the image of Fred and Wilma, Fred’s tie on the hood and the logos of our sponsors on the side. I had the stickers printed on transparent vinyl by some online print shop. They said they couldn’t print white, but since there wasn’t really any white in the design, I went ahead and placed the order. When the arrived it all looked fine. Until I removed the back sheet. I turned out that the colors they printed were not opaque, so effectively the stickers could only be used on a white background. What’s the use of transparent stickers if they can only be used on white? After complaining about it I got a refund and ordered the stickers elsewhere. When they arrived, the colors turned out to be wrong. I don’t know what happened, but it looked like the white they printed was blue. When I called them and send them an e-mail with a picture of the result they apologized and reprinted everything. The next day I finally had the stickers I wanted.

We wanted to have a rooftop tent on the car. During the Carbage run, we sleep at a different campsite every day and setting up and breaking down a regular tent every day is just too much hassle. A rooftop tent is ready to be slept in within 2 minutes. I checked Marktplaats (like the Dutch Craigslist) for a while. The rooftop tents on there were either too expensive, too far away or the seller was unresponsive (why place an ad if you are not going to respond?), but after a few months I found one that was exactly the type I wanted, it was not too expensive, not too far away and the seller responded quickly. I bought it the same day.

In the meantime, I ordered some vinyl wrap for the black spots. I choose the velvet option and that turned out very nice. It feels soft and it has a really deep matte black finish. I think it is the same stuff they use for airbeds. It feels the same anyway. Emmie started working on it. Getting the shape and size right is one thing. Distributing them evenly while avoiding the stickers and covering up the worst imperfections in the orange vinyl wrap all at the same time turned out to be quite a job. One she did very well! 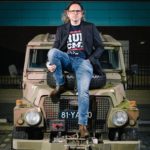